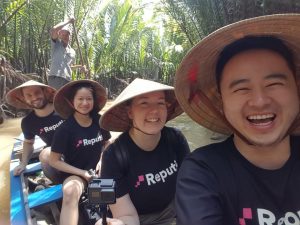 This October, Reputio was lucky to experience what is (hopefully) the first of an annual string of remote workcation trips for the company. Working remotely, we do not often get to work together in person. For some of us this is the first time that we have met one another. After some deliberation, Ho Chi Minh (formerly known as Saigon) came to be the decision. Because we live in different countries, we all travel on our respective flight paths to get to the city.

Breaking down the week for Reputio

All of us have had an amazing week. The team has been able to explore the Bên Thành Market. We have had a great night out amid some of the nightlife bonding. Our group has eaten our way through the city (because if eating is not a highlight of any travel you ever do…I mean, that’s fine, but are you lying to yourself? Probably). Each day, we wake up, have breakfast in the hotel restaurant, and work for the morning. Then we take lunch for an hour or two and explore. In the afternoon we then work until it was time to clock off for dinner. We have struck a great balance between working and exploring the city.

The biggest thing that shocks tourists is the seemingly insane traffic in Southeast Asia. This is particularly true if you are from a western country. Vietnam is one of the worst countries for it. It is no exaggeration to say that even when the traffic lights are telling you to go, you need to be on high alert. Luckily, we have taken cabs and Grabs everywhere, but nonetheless. Here, there are no such things as pedestrian crossings. Even when pedestrians have a green light to cross, they often must weave their way through the traffic that refuses to slow down. There are dogs everywhere as well. Don’t make the mistake of quickly moving to pat them – trust me – let them sniff you first.

With Vietnam’s largest population in a city (12,000,000), Ho Chi Minh is a city that never seems to stop moving. Everything always seems to be in motion. Even amid the chaos of traffic here, everything seems to flow pretty easily. Sure, there are some close calls, but what is life without a little danger? Somehow the traffic situation here just works, because even with all the loud beeping and sporadic, dangerous turning, you get climatise to it and learn to roll with it.

A city rich with history

There is a lot of history in and around Ho Chi Minh city. This trip we have taken the time out during the week to do some tours and experience it for ourselves. Our first big tour has been the Ho Chi Minh War Remnants Museum. This city is known around the world for its prominent role in the Vietnam War. Ho Chi Minh’s War Remnant Museum showcases this in all its harrowing detail. The entrance to the museum is scattered with old military transport, including multiple tanks and planes. To the left side before entering you walk through a replica of the chambers used in the war to hold the prisoners. This tour is something that everyone visiting the city should aim to do in their time there, therefore do keep in mind that it is very intense to see.

The same is true for the Cu Chi Tunnels. We have done an afternoon tour of the tunnels to learn about war time in Ho Chi Minh. We have seen some of the traps used during the Vietnam War and the tunnels themselves. The tunnels you can go down in on the tour have actually been widened so that westerners can even fit in them. The original tunnels were much smaller. The Cu Chi Tunnels is a definitive highlight throughout the trip, as is the museum. When visiting a new place, there is no better way to connect with the place than to understand its history.

The architecture is an intriguing combination of structures left behind after the French colonisation, traditional structures, and local homes and store areas. Along the river, you can see the building that has earned the name ‘Stark Tower’ because of its striking similarity to the building that houses Stark Industries HQ in the Marvel films. The streets are full of food stalls and locals selling things like water and cigarettes.

The food…oh, the food. To say that eating is a highlight of the trip is an understatement. The food in Vietnam is delicious. We have gotten to experience all the Southeast Asian country’s staples as well as some more adventurous dishes (snails stuffed with pork mince comes to mind). From the Bahn Mi and the Pho, to the crispy pork belly and the salted egg prawns, every meal is a different experience. Kevin graciously mapped out a whole week’s worth of potential places to eat.

Some of the best memories of the trip centre around getting an array of dishes to share and having dinners together as a team. Normally, I am a firm believer that the best things happen without a plan. After this trip I feel like food is the one area this ideal is best put to bed.

“In Kevin we trust”.

Off the beaten track with Reputio

It might come as a surprise that there are a lot of tours around the city that are set amid the natural backgrounds of Vietnam. Towards the end of our trip, the Reputio team has taken a day off to do a Mekong Delta tour. Because it takes around two hours to get from the city to the river tour’s first stop, it is great to try some of the local food while listening to some traditional music in between trips down the river in boats.

The exciting rise of the digital workplace

The benefits of building Reputio around a remote network speak for themselves. We get to work in an environment of our choosing, even moving around at will if we want to. There is an innate sense of freedom that comes with forging a career remotely. That freedom is hard to beat. Workcation trips provide the opportunity for us to get together and work. Additionally, we can explore a new place and bond as a team. Company culture is so important. This trip has really given us the chance figure out how to work together to build Reputio up and make it stronger.

Brittany Dean is the Content Manager at Reputio. Since graduating from the University of Queensland in early 2018 she has worked remotely, gaining experience in the writing industry as both a writer and an editor.

This site uses Akismet to reduce spam. Learn how your comment data is processed.